Warning: substr() expects parameter 1 to be string, array given in /var/www/kristinakorsholm.com/public_html/wp-content/plugins/youtube-embed/includes/add-scripts.php on line 211

‘Get your own copy of NYC Head Over High Heels’ 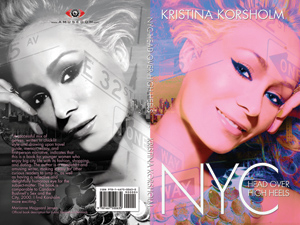 New York City is like the man of your deepest desire. The more you get to know him the better he gets. The more you explore the city’s quirky hoods, cool and fashionable streets and beautiful parks the better it gets. It’s the ‘new city’. It keeps changing and is in constant motion and development, because people arrive every day with a suitcase full of dreams tons of energy and talent. New York City is the first place I have ever felt at home and a part of. It is a human zoo and I love it!!! It is massive, dirty, smelly, hot, sexy and absolutely breathtaking.

Back in the fall of 2007, I was asked to write an honest and sincere book about my lifestyle in NYC by the old and reputable Danish publishing house Thaning & Appel. At that time I was enrolled in a 2 year full time acting program at The William Esper Studio in NYC. I never thought about writing a book before, so once the contract was signed I began penning it down late nights when I was not in acting class or in rehearsals. I saw the project as a row of ‘documentary sit coms’ with a lot of NYC sarcasm and honesty to each episode and not entirely as a book per se.  In the end the effort sort of morphed into a book or novel if you will – luckily since that was the task.

NYC Head over High Heels’ is a blend of genres and therefore a bit hard to label. Some use it as the insider’s travelers guide others as entertainment and their ‘NYC fix’.  Either way one thing is certain: It is a love story between me and NYC – the city that never sleeps and I invite everyone to fall in love too. My ambition is to give the reader NYC unpolished and unlimited. Fun, raw, sexy, cute, over the top, extremely fast paced and of course très fashion.

The first edition of ‘NYC Head Over High Heels’ came out in May 2008. It became a bestseller, sold out and I was pushed to do a new version in English. The English version is up to date with all the latest tips, tricks, hotspots, dos-and-don’ts, the layout and photographs are new and the chapters are more ‘meaty’ in regards to the characters you meet and the experiences you are taken through.

Who did I write the book for? I believe anyone who has ever had a crush on NYC will find it amusing and perhaps inspiring or provocative. But to be honest; I wrote the book because I fell madly in love with NYC and because this monster of a city became a safe haven for me to live out my dreams and passions with no restrictions. So, I guess you can say that this little piece of literature is penned down in the hope that it might inspire other people to follow their dreams whatever they may be. – KK